Excellent quality hay bales, used as a feed for horses and other animals. Grown, cut and baled here on the Fylde Coast in Lancashire to exceptionally high standards.

Hay bales are a staple for any horse owner. They provide the necessary roughage to keep your horse healthy and happy. But not all hay is created equal! We at Fleet Farm believe that our hay is the best there is because it comes from right here in Lancashire, so it’s fresh and environmentally friendly as well as being high quality.

Not only do we grow and sell hay on our own farm, but we also offer next-day delivery service in most areas of England, Wales and Scotland.

As used by the 60+ horses and ponies in our own yard, plus the entire menagerie of cows, chickens, horses, pigs, ponies, goats, deer, alpacas and more next door at Farmer Parrs Animal World!

FREE NEXT DAY P&P via DPD to UK Mainland only, excluding Highlands and Islands!! We can ship our hay bales anywhere in the world, please ask for a delivery price.

We welcome bulk orders and can accommodate any requests for bulk hay bales or barley straw bales. We also manufacture and supply large round bales.

How much does a hay bale weigh?

Standard small bales weigh approximately 20kg, although this weight can vary between 16kg and 22kg depending on how finely the hay has been chopped and how much it has been compressed. Water content also plays a part.

What are the dimensions of a bale of hay?

How much does a hay bale cost?

A standard bale can be bought for around £6.00 in our store, if you are able to collect it from us and transport it home yourself. Packaging and delivery adds considerably to this cost, but we can usually have it with you next working day from order.

How is hay made?

This is a question we get asked often. Hay bales are produced by harvesting the grass crops with a tractor once it reaches its peak of growth and then curing this green hay in dryers which reduces water content to make it more palatable for horses.

Depending on clear sky, a little wind, and fair weather, much of our hay can be dried naturally out in the fields.

Using our own baling equipment we make large 5ft round bales and these smaller rectangular bales. Hay production has been happening at family run Fleet Farm for generations as we were formerly a Dairy Farm.

Hay is grass, legumes, or other herbaceous plants that have been cut and dried to be stored for use as animal fodder, particularly for large grazing animals raised as livestock, such as cattle, horses, goats, and sheep. However, it is also fed to smaller domesticated animals such as rabbits and guinea pigs.

Pigs may also be fed hay, but they do not digest it as efficiently as herbivores.

Hay can be used as animal fodder when or where there is not enough pasture or rangeland on which to graze an animal when grazing is not feasible due to weather (such as during the winter), or when lush pasture by itself would be too rich for the health of the animal. It is also fed when an animal is unable to access pasture, e.g. the animal is being kept in a stable or barn.

Hay can be fed to animals either fresh or dried. When fed fresh, it is known as green hay. When fed dried, it is known as haylage or hay. Hay is a good source of nutrients for animals and is often used as bedding material as well. 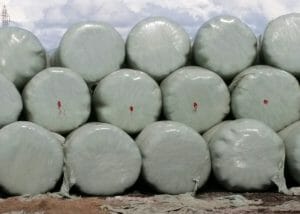 What is a Bale?

A bale is a large bundle of material, typically hay, straw, or cotton, that is tied together with twine or wire for easy transportation. Bales are often used in farming and ranching operations as a cost-effective way to store and transport large quantities of hay or other forage for livestock. Bales can also be used for construction purposes, such as filling in gaps in walls or creating temporary barriers.

What is the Difference between Hay and Haylage?

Hay is dried in the field, then baled, and placed in a barn to sweat out. Here at Fleet Farm, Hay is stored in the barn for a minimum of 3 months to sweat out.

Haylage is baled slightly earlier and has a higher moisture content. It is then wrapped to seal in all the goodness. When stored, fermentation occurs naturally within the bale. Again, this is stored for a minimum of 3 months.

If you find your hay or haylage to be too rich for your animal, it can be mixed with roughage such as Barley Straw or Oat Straw which can be found in a lot of Light or Low-Calorie Chops.

A clue to your hay bale or haylage bale being too rich is if you find your horse eating its straw bedding.

What types of Hay Bales are there?

There are many types of hay, including alfalfa, Bermuda, clover, Timothy, and wheat. Each type of hay has its own unique characteristics, and each is used for different purposes. Alfalfa is a type of hay that is high in protein and calcium. It is often used as a feed for livestock, as it is very nutritious. Bermuda hay is a type of grass that is commonly used for hay.

What are the benefits of hay bales?

Hay bales can offer a number of benefits to both farmers and livestock owners. For farmers, hay bales can provide an easy and efficient way to store and transport large quantities of hay. They can also be used to create temporary fencing or barriers, as well as being used in the construction of certain types of buildings. Livestock owners can use hay bales to provide their animals with a comfortable and safe place to sleep, as well as a source of food and bedding material.

There are many different types of hay bales, and many different places where you can buy them. The most common type of hay bale is the round bale, which is typically between 4 and 6 feet in diameter and weighing between 1,200 and 1,800 pounds. These bales are usually sold by the ton, and you can usually find them at your local farm supply store or feed store.