You are here: Home1 / Science2 / How is your Horse Really Feeling? New Tech Tells Us More 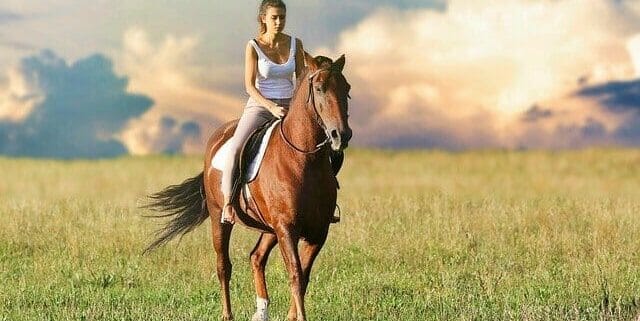 Ethologist Martine Hausberger and colleagues from the University of Rennes created and tested a mobile headband that detects brain waves in horses.

Martine dreamt up the device while conducting a previous study, which found horses had more difficulty opening a sliding door over a food box when stressed.

She saw that electroencephalograms (EEG), which record waves of electrical impulses in the brain, could theoretically pick up on the mental state of a horse.

However, no one had found a way to record brain waves in animals while they move around. Animals needed to be restrained or sedated as the recordings required placing electrodes in specific positions on the head and running cables from them to a recording machine.

Hugo spent six years developing a device for horses. He created a headband that has four electrodes with tiny needles, which poke gently against the skin.

Together with ethologist Mathilde Stomp, Martine and Hugo took EEG recordings of 18 horses, half of which were stabled, and the other half lived in herds in open fields.

The stabled horses showed an average of two and a half times more right-hemisphere “gamma” waves than those in open fields. In people, these waves are often a sign of anxiety, distraction or depression.

The turned-out horses showed twice as many left-hemisphere “theta” waves on average. These waves are generally a sign of a calm and attentive mind.

The findings were published in Applied Animal Behaviour Science.

“Quantitative resting-state EEG power spectrum appears as a highly promising tool for exploring the brain processes involved in the subjective perception of chronic welfare, as a useful complementary tool for welfare assessment.”

by Rachael Turner, Your Horse Magazine

Find out what’s inside the latest issue of Your Horse